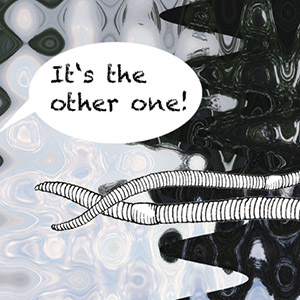 Based on an interview with the Finnish artist Teuri Haarla about the beneficial qualities of earthworms. Microtonality and theatrical elements are combined into a 20min audio-lsd-trip.
Originally created for radia.fm. Show #592. Hosted by radio x Frankfurt, Verena Kuni. The „Earthworm“ was featured within the frame of the Radiophrenia Festival, Glasgow 2016 and at Documenta14 Public Radio, 2017, curated by Knut Aufermann and Sarah Washington.
Length: 27 min.

The earthworm travels on radio frequencies, earthy hacks and conglomerates of audio matter. S/he passes through mosquito clouds (yes, this earthworm can fly!), bird songs, thunderstorms, attends a Finnish summer theatre show, listens to a boy and his mother singing, visits the acoustic remnants of a German garden show, finds happiness in the ringing of porcelain bells and, finally, merges into silence and is gone.

Supplemented by a series of cartoons.
Documenta14 broadcast. Listen on Mixcloud: